.NET interview questions: - How will you distinguish between ForeGround and BackGround Threading?

.NET interview questions: - How will you distinguish between ForeGround and BackGround Threading?

Threading: - threading is a parallel processing unit and helps you to access multiple tasks at a one moment of time.

The following points will show the difference between the Foreground and Background thread.

Now, let's create a simple demonstration to see the exact difference between the Foreground and Background thread.
In order to see it practically just follow the following steps.

Step2: - Import the namespace using System.Threading; in your program.cs file.

Step3: - Now just add the below code snippet in your program.cs file.

Step4: - Now, just run your Console Application and will see result like below diagram. 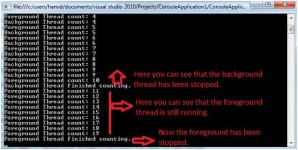 The above diagram proves that the Foreground thread has the ability to prevent the current application from terminating.


See our other Most asked Dotnet interview questions  for preparation