What is RxJs and why do we need it ?

What are observables and observers?

What are observables and observers? RxJs library helps to handle async data stream easily. But in order to access the async stream it has to be exposed as a rxJs Observable object. The listener who is interested in accessing the Observable stream is exposed as an observer.

In simple word observable represents async stream of data and observer subscribes to the observable to receive the stream.

What is stream in RxJs?

Stream in RxJs is asynchronous data emitted from observables.

"Subscribe" function starts the stream from observable to the observer function. You can see in the below code how the subscribe function takes a function as reference. So when data is streamed from Observable its received by the Listener function.

How to unsubscribe from the stream?

What are operators in RxJs? 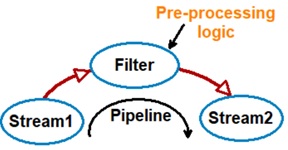 Below is how the source code looks like. We have stream1 on which rounding operator is applied and stream2 is created and filter applied to create stream3.

Where did you use RxJs in Angular?

Most of the times rxJs is used in http calls with angular. As http streams asynchronous data we can subscribe , apply filters to the http streams.

Below is a simple sample code of how RxJs can be used with HTTP calls.

Differentiate between RxJs and Promises?

How to install rxJs?

Clear Angular basic concepts with this  latest tutorial for Angular freshers and developers :-